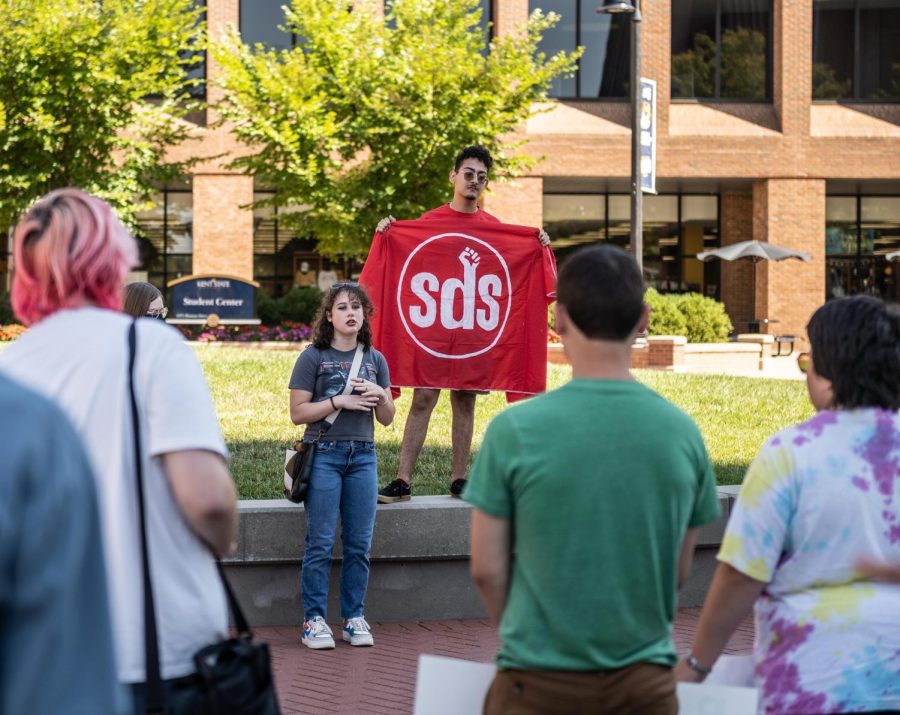 “We are living under the tyrannical rule of those nine unelected, unaccountable dictators.”
Shouting with a red banner in hand, Kent State’s Students for a Democratic Society led protestors across campus to demonstrate continued support for reproductive rights two months after the overturning of Roe v. Wade.

On June 24, the Supreme Court of the United States overturned Roe v. Wade, ending the constitutional right to an abortion in the United States. Following the decision, the state of Ohio’s “Heartbeat Bill” went into effect, banning abortions at as early as six weeks of pregnancy. SDS held an initial protest on June 24 and has continued to march for reproductive rights over the past two months.

The goal of the Sunday march was to reignite the struggle for abortion rights on campus, said Maya Niesz Kutsch, SDS chair.
“We want to show that there are people that care about this issue and are not being represented by the Supreme Court and to show others that there are people who are trying to fight for them,” Niesz Kutsch said.
Sunday’s march began on the K at Risman Plaza at noon with a speech by SDS member Christian Heller.

“The United States Supreme Court is a rogue institution, made up of nine unelected, unaccountable individuals appointed by presidents who lost the national popular vote,” Heller said. “We must mobilize a mass movement of students. Take to the streets and show these far-right fundamentalists that we will not sit idly by and let them strip us of our rights.”

Following the speech, the group of about 25 protestors began to march toward the rock on front campus chanting phrases such as, “Hey hey, ho ho, the heartbeat bills have got to go!” and “They say no choice, we say pro-choice!” The march concluded with members spray painting the rock.

Niesz Kutch encouraged people to continue to speak out for abortion rights.

“The situation has not changed; it is what people are living with now,” she said. “We can’t stop talking about this.”

Harley Hill, a freshman public health major, attended the march to encourage others to be politically active and to show up to vote.

“I hope that we can get more people riled up so that they can vote for democratic leaders,” Hill said. “It is critical that people vote so it makes it more difficult to pass such extremist legislation… I don’t know how to explain to people that they should care about people other than themselves.”

SDS plans to continue to protest and educate on campus. Their next action will be another abortion rights demonstration on Sept. 7.

Grace Springer is a staff reporter. Contact her at [email protected]