Sex week ends with a bang at Sextoberfest 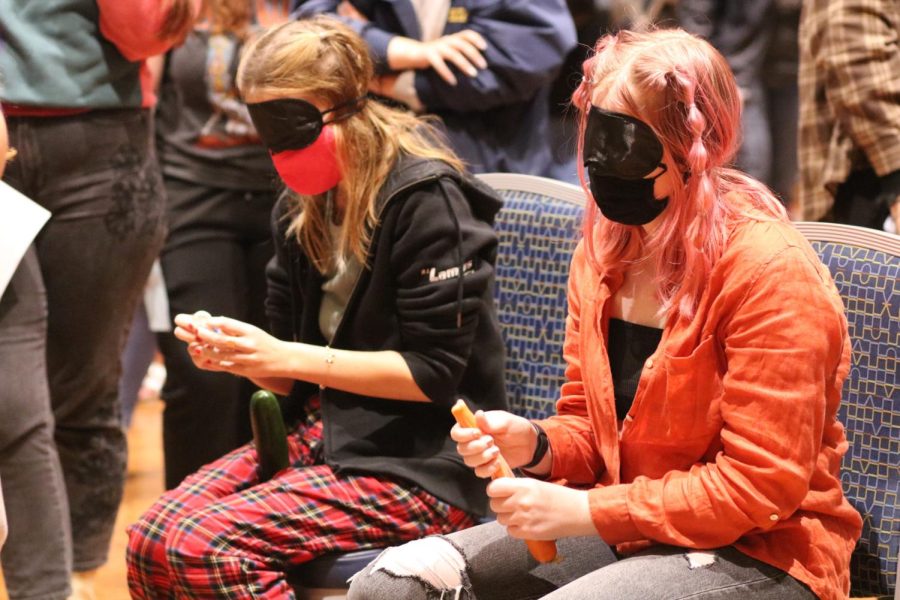 At 7 p.m. students were lined up to the doors of the ballroom in the Student Center. Students received a free Sex Week t-shirt by stopping by all twelve booths. Students also enjoyed free cupcakes and water.

Next to the cupcakes, students were able to take pictures in front of the colorful balloon display shaped like a rainbow.

The ballroom was lively with the balloon game where students failed to keep their balloons from popping. Lizzo played in the background and blindfolded students laughed while trying to put condoms on fruit.

Sex Week was an exciting time for Rebecca Nugent, a sophomore communications major and the KIC director of student relations. Known as the Condom Fairy, she walked around in her neon green tulle skirt and matching glittery wings.

“We introduced the character of the Condom Fairy who blesses Kent State students with condoms during our kickoff event,” Nugent said. “I’ve been volunteering almost every Sex Week event and dressing up as a fairy is just a really fun way to engage students and promote the events from their pictures on social media.”

Landon Mace, a freshman biology major, said it’s been nice experiencing such a welcoming environment where sex education is able to be talked about.

“It’s not like middle school where it wasn’t taken seriously. But now that we’re mature we want to be safe about it,” Mace said.

About 400 students attended the event. The booths had lines stretched across the ballroom and the entrance to the event had students cascading down the main stairs of the student center. This was no surprise for Interhall Council advisor, Yewande Moore.

“I feel like students want to participate and they want to get involved right now, especially after this year with COVID,” said Moore. “Being cooped up, being separated from people for so long, and being told that you can’t go anywhere builds that desire to get out. We’re just here to provide those opportunities.”

Natalia Hernandez Maceira is a health reporter. Contact her at [email protected]