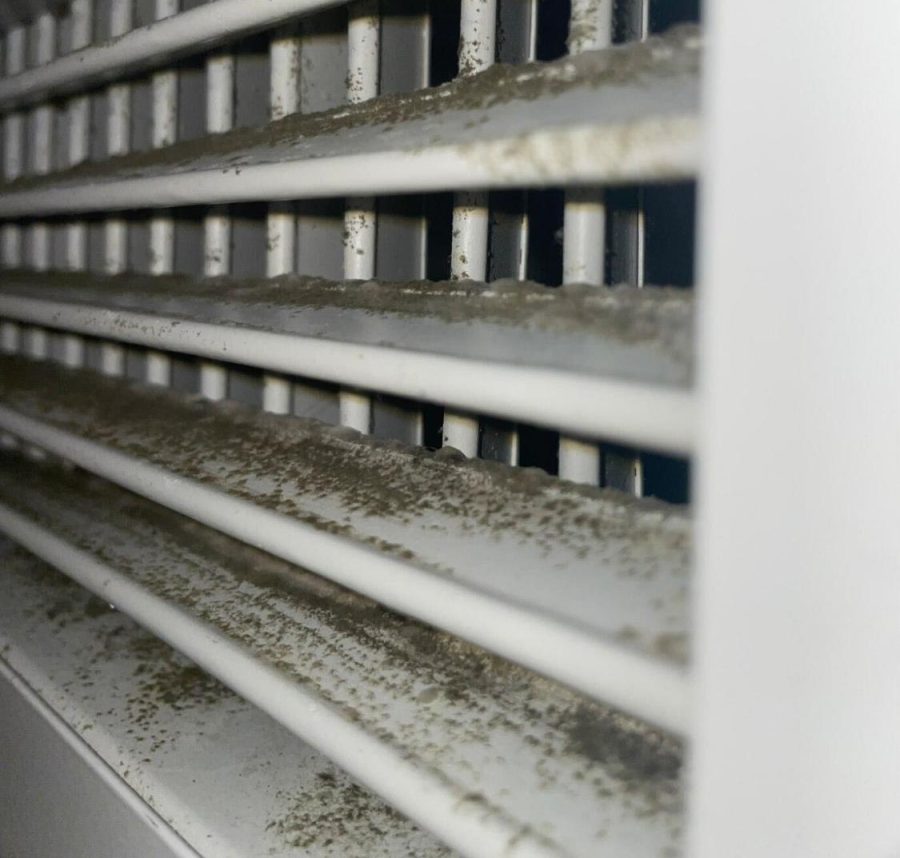 Mold lines the slats of a heating and cooling vent in Kent State's Manchester Hall. Students reported mold in at least four resident halls on campus.

The reports come from residents in Allyn, Fletcher, Clark and Manchester halls.

Haley Adams, a freshman nursing major who lives in Clark Hall, was one of the students to report mold growing in rooms on her floor.

“Everyone has been waking up sick with sore throats and like coughs, including me and my roommate,” Adams said in a text message to a KentWired reporter.

She ordered a 72-hour mold test kit on Amazon and is awaiting results.

One TikTok by @keeping.up.w.kay, a Kent State student who clarifies in the video’s comment section that they live in Fletcher Hall, shows the mold in their room. At the time of publication, it has received 7,600 likes and 89.3 thousand views.

The caption on the video said, “Moving out week 4 bc we literally have mold growing on EVERYTHING. Live. Love. Kent.”

@keeping.up.w.kay Should be focusing on schoolwork not mold. #kentstate #allergicasf ♬ original sound – not zach

Other commenters said they live in other halls and have also had issues with mold.

“STOPPPP. I’m in Clark and we have this issue but still waiting for it to be solved,” @lexnswain said in a comment.

One commenter said, “I’m in Fletcher to, and I moved out Monday.”

Another commenter said, “Oh so this is why I’m sick.”

Other commenters stated they found mold in their rooms, including Johnson and Centennial Hall B. KentWired has not been to substantiate these reports as of the time of publication.

University officials shared a statement with KentWired on Thursday afternoon. Several on-campus residents have recently found what appears to be mold growing within their HVAC units.

“Kent State University has become aware of some mold and mildew concerns in four residence halls. Each report for mold or mildew is taken seriously,” the statement said. “Kent State University follows EPA recommendations for responding to concerns of mold or mildew. As appropriate, each situation has received attention by staff members in University Facilities Management (UFM), Environmental Health and Safety (EHS) and University Housing. We apologize for any inconvenience this has caused to the residents living in these halls and will get it mitigated as quickly as possible.”

Residents of the Eastway complex received an email from University Housing on Thursday evening acknowledging the situation.

“We want the Eastway community to know that we are aware of some mold and mildew concerns in these buildings,” the email said. “The issues are mostly found to be dust and dirt on the louvers of the heating and cooling units. In less than 5% of the cases, the louver had mildew or mold caused by high humidity in the room.”

The email clarifies that “each residence hall room is ventilated independently.”

In addition, University Housing is implementing a short-term strategy, including requesting that University Facilities Management inspect every room in the Eastway Complex.

Room inspections will begin on Monday, Sept. 26, according to the email. Inspections will take place between 9 a.m. and 4 p.m. with a more detailed schedule forthcoming.

“In a few situations, there was evidence of mold or mildew growth,” the email said. “In the situations where the mold growth was minor, the diffusers and/or HVAC system, was cleaned. In two cases where the growth was more substantial, the students were offered the chance to relocate so we could do a more thorough cleaning of the room.”

Students who don’t wish to have their rooms inspected were provided with a Google Form link to indicate their preference.

The email also identified a long-term strategy, including looking into hiring an engineering firm to address the issue and “provide recommendations for for long term solutions to the humidity issue.”

Students can check their rooms for mold.

“Large mold infestations can usually be seen or smelled,” according to Knox Public Health.

So far, most of the students who have reported mold sightings to KentWired have found it in their HVAC units and in cracks in their walls.

“Students who feel sick should be cautious of mold,” according to the Centers for Disease Control. “For some people, mold can cause a stuffy nose, sore throat, coughing or wheezing, burning eyes, or skin rash. … People with asthma or who are allergic to mold may have severe reactions. Immune-compromised people and people with chronic lung disease may get infections in their lungs from mold.”

Anthony Scilla is a reporter. Contact him at [email protected]

Cassidy Grentz is a reporter. Contact her at [email protected]