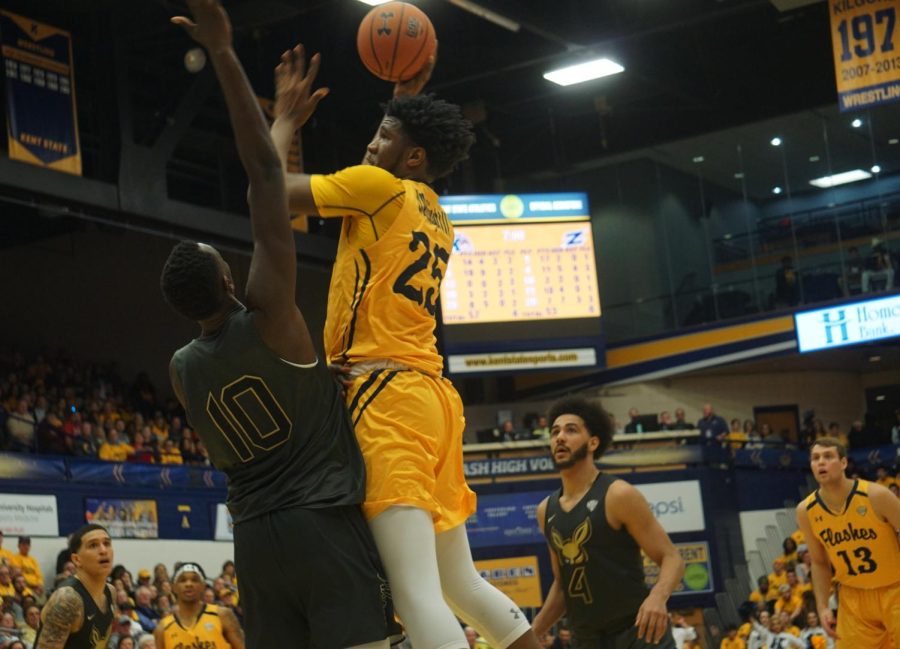 Senior Philip Whittington (25) goes up for a shot against Akron at the M.A.C.C. on Friday, Jan. 31, 2020. Whittington finished with 11 points and grabbed five offensive rebounds. He scored the game-winning layup with 20 seconds left to give Kent State the 68-67 win.

Senior forward Philip Whittington checked into the game for the first time in nearly six minutes.

He stood near the hoop ready for senior guard Antonio Williams to drive. Williams drove hard to the rim, as two Akron defenders closed in on him. He shot a tough layup. The shot hung on the rim and rolled off, but Whittington fought hard and beat his man to the right side of the rim.

The Flashes would hold on for a 68-67 win after the defense walled off the paint on Akron junior guard Loren Cristian Jackson’s drive. He passed it to Channel Banks, whose 3-pointer hit off the back of the rim. Here are five takeaways from the win:

1. Whittington rebounding from a poor first half, and scoring the game-winning points.

Whittington’s season has confused many. He has struggled to find consistency this season. The preseason All-MAC forward scored 29 points in an 85-71 win over North Carolina A&T on Dec. 19. He is also had 13 games in single digits this season.

Here is Senderoff’s assessment of the final play:

“The play was an isolation for Booman (Antonio Williams), and he drove it and got to the rim,” Senderoff said. “Generally speaking, people collapse, guys collapsed on him and he got it up on the rim, and Phil was able to find a little bit of room to tip it in. That was basically what Phil was in there for. He set a screen to get Booman open at the top of the key, and then he rip drove it with his right hand where he’s really strong. If they helped, there was Troy. If not, he was going to get it on the rim.”

He finished with 11 points on over 60 percent shooting. That marked the first time since Jan. 7 against Toledo that he scored in double digits. He battled the flu against Miami and Western Michigan, combining to score two points on 0-for-6 shooting.

Over the other three games, he scored 20 points, shooting 8-for-19 from the field.

2. Pippen continued his scoring streak, and has truly emerged as one of the most unstoppable forces in the MAC.

Pippen’s scored at least 16 points in four straight games. The Flashes are 3-1 during that span.

“I went to sleep early last night so I could wake up early,” Pippen said. “I’ve been waiting for this day to come. I made sure I was prepared. I did my thing, and we won.”

The Flashes are 14-5 when Pippen scores in double digits.

Rebounding has been his one weakness at times this season, but Friday night he grabbed 12 rebounds, including three on the offensive end.

“There was a point in the season where I wasn’t really getting enough rebounds,” Pippen said. “The coaches were on me about getting back on the glass. I’ve just been trying to get back to being active on the glass because nobody can stop me from getting to the rim.”

In the first half Jackson scored a game-high 12 points while shooting over 50 percent. The majority of his scoring seemed to come against Williams or in pick-and-roll sets with Whittington trying to keep the speedy Jackson in front of him.

Kent State opted to have senior guard CJ Williamson guard Jackson for spurts in the first half. His 6’6” frame bothered the 5’8” Jackson. Williamson’s defense helped slow Jackson to four points over the final 13:23 of the first half.

Despite Williamson’s success in spurts, Williams felt confident in his ability to guard the third leading scorer in the MAC in the second half.

“I took it personal,” Williams said “I was gonna step up, and I was gonna be the one to guard [Jackson]. I told the coaching staff, ‘I don’t want anyone else to guard him. I got him.'”

Williams limited Jackson to seven points on 3-for-6 shooting and did not allow him to make a three over the final 20 minutes.

4. Sophomore guard Anthony Roberts struggled, but it did not matter.

He is usually the guard who runs the offense when Williams is on the bench and he did a subpar job on Friday.

He could have been on the bench for the majority of the game, and the crowd would not have noticed until the second half.

Three of his four steals came in the first 12 minutes of the second half. During that span, Kent State outscored Akron 25-16 to take a 52-49 lead.

Roberts has grown over the Flashes’ three-game win streak. He has shot 7-for-24 and combined to score 18 points, but his shot selection has improved immensely.

5. Kent State’s defense limited Akron to 30 percent 3-point shooting in the second half.

The Zips are the best 3-point shooting team in the MAC— attempts, makes, percentage. Akron leads the conference in all three categories.

They shot 3-for-8 in the first half, making two 3-pointers in the first three minutes of the game. The Flashes were late on rotations during that time and Akron made them pay.

Three games ago, Senderoff questioned his team’s effort, particularly on the defensive end.

“There’s a lot of stuff [the coaches] are communicating, and it’s going in one ear and out the other,” Senderoff said after a 76-69 loss to Northern Illinois on Jan. 21. “That’s a problem.”

That problem has clearly been addressed, as Kent State held its opponents to under 40 percent from three after allowing Northern Illinois to shoot close to 50 percent.

Kent State will play Ball State Tuesday at 7 p.m. at the M.A.C. Center. The last time the two teams played Williams did this:

Antonio Williams. Game-winner. But HOW?!?!?!?! pic.twitter.com/EBsm1qvTct