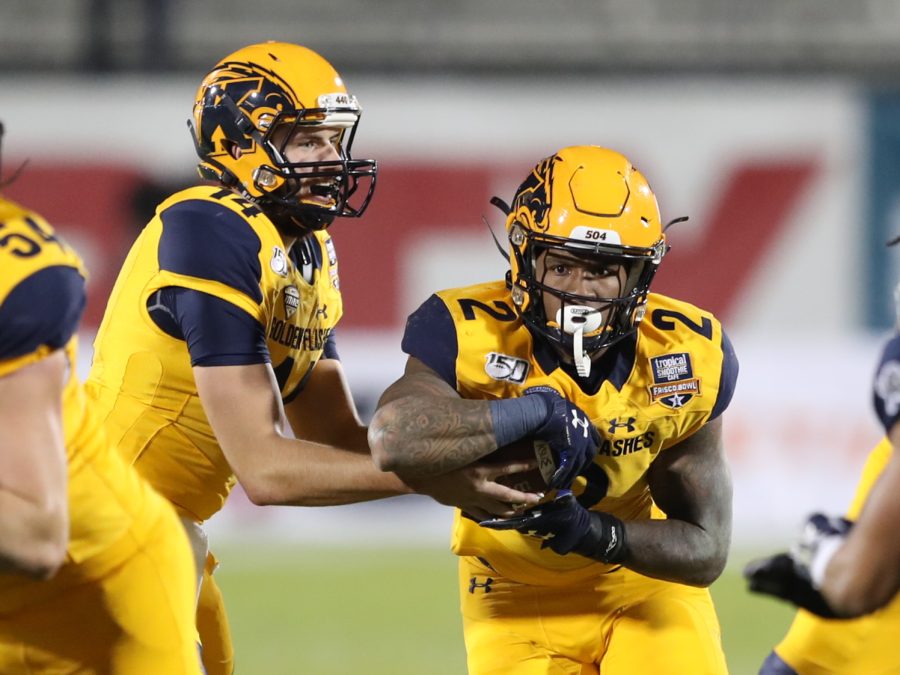 Kent State quarterback Dustin Crum (14) hands off to running back Will Matthews (2). Crum finished with a career-high 147 rushing yards, while Matthews added 56 yards and a touchdown.

Coach Sean Lewis braced for it.

Two players dumped orange Gatorade on his head. The liquid drenched his navy blue Kent State short sleeve sweatshirt and long sleeve undershirt so much that he shook his arms out in a futile attempt to get some of the excess off.

He turned and smiled in relief. A long four-month grind ended with Kent State’s first bowl game win in program history. Through all of the heart-breaking losses, suspensions, benchings and dismissals the only thing that mattered— Kent State 51- Utah State 41.

He reached his goal— or rather, the team reach its goal.

“This is all about the kids,” Lewis said. “I’m really proud of our kids, and our FlashFast family. This is just the beginning of FlashFast football and where Kent State’s going.”

Lewis put the ball in one of the Flashes’ best playmakers hands on the biggest play of the game.

On 4th-and-1 from the Utah State 4-yard line with under two minutes to play, Kent State could have easily opted to kick a short field goal, having wasted two of Utah State’s three timeouts.

But instead Lewis called on Crum to make the right read.

“You know coach, he’s an aggressive play caller,” Crum said of the decision to go for it on 4th-and-1. “That’s really just our style of play.”

Crum took the snap, kept the ball in the gut of senior running back Will Matthews, drawing the defense to the inside. Then suddenly he pulled the ball out and beat everyone to the corner.

“I just thought about it as a normal play,” Crum said. “You can’t try to do too much. The defensive end crashed so I pulled it. It was a day one read and (something we installed) day one.”

Crum finished with a career-high 147 rushing yards, adding two touchdowns. He also completed 80 percent of his throws, while throwing for 289 yards and two touchdowns.

After the game, Crum joined Lewis and sophomore defensive back Qwuantrezz Knight on the stage to be presented with offensive MVP.

“As a competitor, you always try to set the bar high for yourself,” Crum said. “If you sell yourself short, you’re never really going to accomplish anything. Mindset wise early on in the year the goal was the same as the team’s— win a MAC championship and win a bowl. The personal accolades like MVP were never really a part of it.”

Utah State looked like it could run away with the game after scoring a touchdown on its opening drive in less than three minutes, but Crum, as he’s done all season, answered.

On its first two plays from scrimmage the Flashes’ offense looked staginant. It appeared that NFL Draft prospect Jordan Love would dissect a Kent State defense that looked like it could not compete with him.

But that changed on 3rd-and-7 from the Kent State 22-yard line, Crum found Isaiah McKoy streaking down the right sideline for a 78-yard touchdown.

It felt like if Kent State gave Love and Utah State’s offense the ball back, they would have easily trailed 14-0 early in the first quarter. Instead, with the game tied, 7-7, the Flashes defense came out and forced a quick three-and-out.

Sophomore running back Xavier Williams scored from two yards out on the following possession to give Kent State a 14-7 lead with under six minutes left in the first quarter.

Williams would later suffer an apparent leg injury after getting rolled up on, similar to an injury he suffered at Wisconsin earlier this season. He spent the entire second half on the sideline.

Senior Will Matthews played through an apparent leg injury he suffered in the first half. He came out for the final few plays of the half, but made his return after halftime, scoring in the second half.

Kent State turned the ball over one time the entire game. It came when former starting quarterback junior Woody Barrett ran the ball on a run-pass option. After a solid gain he fumbled and Utah State took over on its own 30-yard line. They added a 45-yard field goal to take a 27-26 lead with under three minutes left in the third quarter.

Trailing 27-26 early in the fourth quarter, Crum found senior receiver Antwan Dixon for 53 yards, setting up a four-yard touchdown run by Matthews to give Kent State a 33-27 lead with about 13 minutes left.

Less than a minute later, on 3rd-and-9, Utah State ran a jet sweep with receiver Deven Thompkins, who went unscathed down the sideline for a 57-yard touchdown.

Crum would add a 1-yard touchdown pass to Dixon to give Kent State a 41-34 lead, and the Flashes’ defense would come up with a much needed takeaway. They forced running back Gerold Bright to fumble the ball, ending a promising Aggies’ drive.

Sophomore kicker Matthew Trickett would add his fifth field goal of the game to extend the lead to 44-34. He made his own case for offensive MVP, finishing 5-for-5 on field goals and keeping the ball away from dangerous returner Savon Scarver with several sky kicks.

Love added a passing touchdown to cut the lead, 44-41, but on the ensuing kickoff senior defensive back Jamal Parker, who could not play in the first half due to a targeting penalty in the second half of the win over Eastern Michigan, returned the ball inside the Utah State 15-yard. The return setup Crum’s heroics on 4th-and-1.

Lewis stood on the stage with Crum, the man he named starting quarterback less than four months ago, while he accepted his offensive MVP award. Lewis raising the Tropical Smoothie Cafe Frisco Bowl trophy. Finally, Lewis could relax after securing the first bowl game in Kent State history, and his first winning season at the helm.

Again, he received victory shower. This time it consisted of green smoothie.

“Green smoothies are sticky, and it’s awesome,” Lewis said. “This is just the beginning.”