Kent State will play in first bowl game since 2012 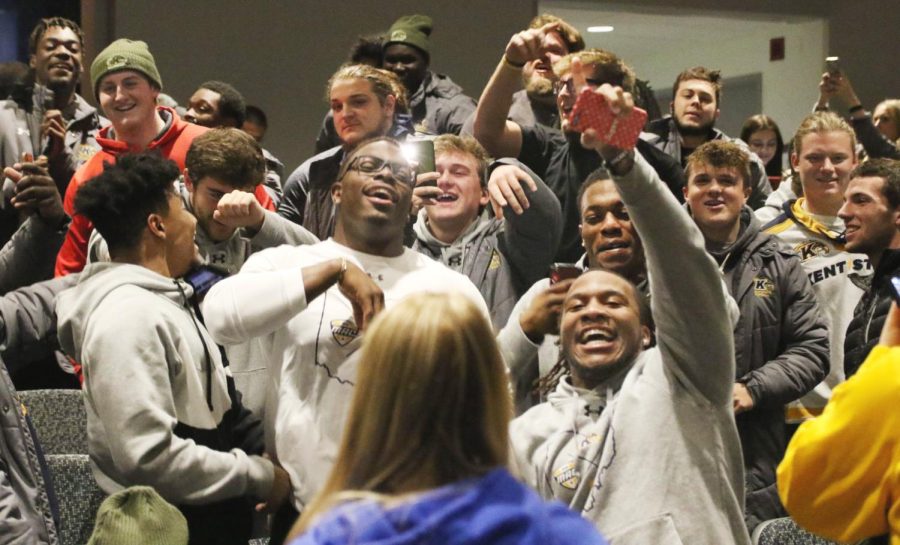 The Kent State football team celebrates after hearing they will be going to Frisco, Texas to play in the Tropical Smoothie Cafe Frisco bowl.

Coach Sean Lewis stood in front of a room full of his players, who just a month ago were a 3-6 team facing another losing season.

After finishing the season with three straight one possession wins, Lewis told everyone in the room that their hard work had paid off, and they would be playing Utah State in the Frisco Bowl on December 20 at 7:30 p.m.

The Flashes were waiting in anticipation all week. Lewis heard the news from Athletic Director Joel Nielsen who received a phone call from a bowl committee member Sunday afternoon.

“It’s awesome,” Lewis said. “It’s been a long week of us waiting to be able to stand in front of the guys and say that we’re going to a bowl game we’re really, really excited about it.”

According to Nielsen, Lewis told him that the Flashes would not lose any of the remaining games after a 21-point comeback win against Buffalo on Nov. 14. They won their remaining two games against Ball State and Eastern Michigan.

Since the final regular season win, Lewis has been the majority of his time on the recruiting trail and organizing practices.

“It’s just really satisfying for the kids, as we were stealing those practices early on and the conference office kept telling us that things were looking good and to keep practicing and keep prepared,” Lewis said.

He understood that they could be left out. However, according to Nielsen, it was between Eastern Michigan and Toledo for the last bowl game.

“But there’s always that little bit of doubt in your head. We’re really protective of our kids, and we look after them like they’re our own sons. You don’t want to get them all excited and then pull the carpet out from under them.”

Lewis understands that the bowl game could change the perception of Kent State football.

“It just shows the upward trajectory that we’re going (on),” Lewis said. “This is a great reward for everything that we’ve done in the past and where we’re going in the future. This is a tremendous opportunity for us to finish with a winning season.”

Utah State (7-5, 6-2 Mountain West) finished third in the MW Mountain division behind No. 18 Boise State and No. 24 Air Force. The Aggies finished with the sixth ranked scoring offense in the conference, averaging 28.3 points per game.

The Aggies’ passing offense, led by junior quarterback Jordan Love, has been the main means of scoring. Love’s thrown for 257.1 ypg while completing 60 percent of his throws. He has 17 touchdown passes and 16 interceptions, while throwing for 3,085 yards this season. Four of his interceptions came against No. 1 LSU and No. 18 Boise State.

There will also be a fan travel pack for $739 per person for a double room, which will allow fans to stay in the team hotel from December 19-21. The pack also includes a welcome tour event, ticket at midfield, an official Kent State pregame event, round-trip game day transportation, Frisco Bowl souvenir and an event lanyard.

Transportation to and from Frisco, Texas is not included in the package.

The game will also be available on ESPN2.