Benefits and drawbacks of on, off-campus jobs 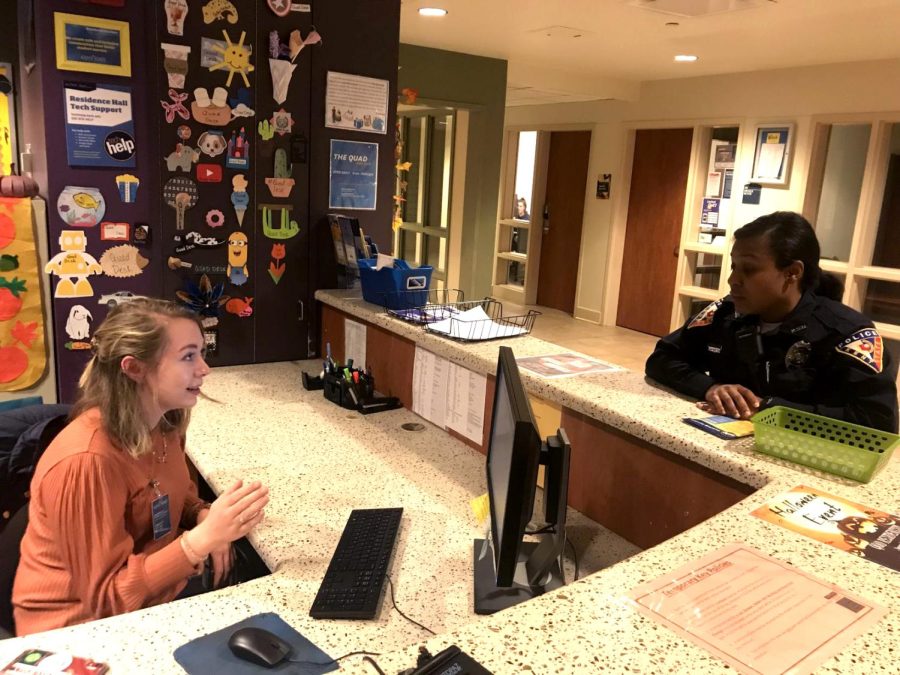 Gracen Gerbig, a senior biology major, works at the Quad Desk for Lake, Olson, Stopher and Johnson residents on Oct.31, 2019.

College students face multiple expenses each semester when enrolled in school. This includes costs for tuition, books, food, housing, travel and other necessities to live. College students constantly search for work to make money to pay for these expenses.

Students have two choices when searching for employment: either an on-campus or off-campus job.

Incentives to work an off-campus job include more flexible work hours and additional job perks from the company.

Bailey Downin, junior interior design major, works at the off-campus Starbucks next to the John Eliot Center of Architecture and Environmental Design. She said it makes sense to work at this location because she lives off-campus and attends class in the architecture building.

Downin works off-campus because Starbucks offers its employees many benefits, she said.

“On campus they’re technically Kent State dining employees. We have discounts — partner numbers where we can get free things whenever we go into any other stores,” she said. “We get health insurance and eye insurance. We get free Spotify, too. Even if you’re part time, you get vacation.”

Downin recommends Kent students to work at an off-campus Starbucks because of the perks and less hectic work environment.

“I feel like the library one is always busy because everybody’s going there to study. People come here to study, but it’s not a super big place. We’ll be busy, but not have out-the-door lines,” she said.

Downin said students may prefer to work on-campus because of convenience and the jobs often work around class schedules.

Store manager of the off-campus Starbucks Laura Mould said a big plus for students looking to work at their store is the specific location. She said it offers a bit of separation from campus.

Mould said additional job perks a corporate Starbucks offers include free drinks per shift, 1 free food item per shift, 1 pound of free coffee weekly, health benefits earned after working 20 hours a week and a 30 percent discount that can be used at other corporate stores.

“I honestly think a lot of it is the environment that we have. A lot of applicants are surprised when I tell them about all the benefits. They don’t know about them,” she said. “We have such a unique store here specifically too that a lot of students just love the environment that they can walk into. That encourages people to apply.”

“We have students who can work before their classes and be out of here by 9 o’clock in the morning and they have a shift down. Or after their classes are done they can come here work 6 to close and get a full shift in. I know that’s something a lot of students look for that they can fill in their time before and after classes,” she said.

Mould said people may prioritize on-campus jobs because they want to find part-time work in their future career field or would prefer to walk to work.

“I try to encourage my team to not to just think of this as you punch in and you punch out and that’s it,” she said. “We’re a family here. That’s how Starbucks tries to be across the board. I think that is something that really sets us apart from other companies.”

Lexi Hough, a sophomore theater performance major, works as a Dunkin’ Donuts team member. The biggest incentive for her to find work off-campus was a larger paycheck.

“I have to pay for college and $8.50 [per hour] wasn’t cutting it for me. So I decided to go off-campus because they were paying about two dollars more. Back home I got paid about $11 an hour.” Hough was a manager, so having her salary drop down to $8.50 was not ideal.

She likes the people she works with and the fast-paced work environment at Dunkin’ Donuts makes time go by faster.

One big inconvenience for Hough is her 4 a.m. walk from the Eastway residence hall to Dunkin’ Donuts for her shift. She said a good amount of employees work at Dunkin’ Donuts because the location works with students’ school schedules.

“They also work around school schedules completely. If you need to just do a three hour shift they’ll let you come in for three hours, which is really nice,” she said. “Even though it’s off campus it’s kind of on-campus because they know most people who work here are college students.”

People may consider working on-campus because of safety concerns. Hough’s mom was initially scared, but she eventually understood the pay was better at the off-campus job.

“A lot of people’s parents want them to work on campus because working off campus scares them,” Hough said.

Jacob Kulas, a senior English major, is a writing tutor in the Kent State Writing Commons. Kulas aspires to be a high school English teacher in the future. He said a student can leave class and walk to their job to work a shift when working an on-campus job.

He recommends students work in the Writing Commons.

“It’s just an amazing working environment. There’s a lot of freedom. You get to help other people,” Kulas said.

He said his current supervisor Jeanne Smith is the best boss he’s ever had.

Kulas said there are more jobs off campus, but if you are lucky enough to find something you want to do on campus it’s hard to beat that.

“I strongly prefer working on-campus to off-campus. It’s directly where I am. After class I can just walk over here and I can start working right away,” he said. “The hours are really flexible. I get to work with people I know from my classes. I have friends here; it’s pretty great.”

Gracen Gerbig, a senior biology major, started her job at the Stopher/Johnson Quad Desk in August this semester. She previously worked at Grazers on and off campus before working with Residence Services.

She chose to leave her job at Grazers because she needed more time to study.

“There are obviously times when we’re really busy processing mail, packages and helping students out day-to-day,” she said. “But there are periods of time, too, where I am able to sit and work on homework.”

Gerbig believes some people value studying more and that may be a reason they compromise hours and wages with an on-campus job.

“You can work more hours off-campus. Kent student employees work a maximum of 28 hours. Additionally, minimum wage on campus is $8.55 or $8.50. That’s not a livable wage,” she said. “You can’t work 28 hours a week on $8.55. Depending how many studies you have, it’s not feasible. I think some people might value studying more, so that might be a good compromise for them.”