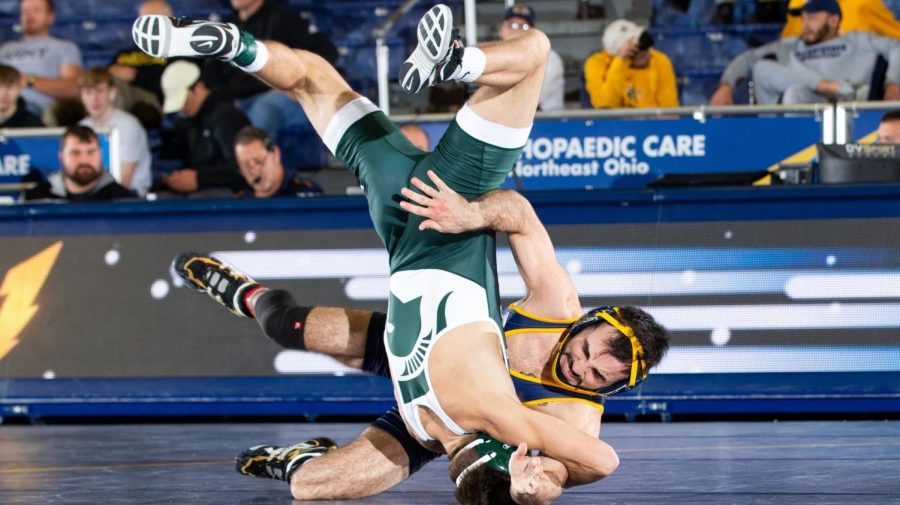 Kent State wrestling matched up against two power five opponents in No. 29 Michigan State and No. 19 Oklahoma on Saturday at the Memorial Athletic and Convocation Center.

The Flashes lost 29-7 to the Sooners but were able to win two matches in the dual. Freshman Earl Blake secured one of these wins with a victory over Tommy Hoskins in the first extra frame after fighting hard to force overtime. Junior Kade Byland won a major decision with an 11-3 win in his match at 165.

Despite the results, senior Tim Rooney and sophomore Kody Komara fought hard in their matches against the Sooners with Komara’s loss coming in extra time.

The Flashes were also able to take two matches from the Spartans in a 36-3 loss. After a close defeat against the Sooners, Rooney bounced back with an 8-5 victory over Jake Speiss. The Spartans would continue a successful run until junior Andrew McNally won a thriller in overtime after coming back from 10-6 down.

The Flashes are now 2-3 in dual meets this season with their next competition coming next weekend at the Navy Classic in Annapolis, Maryland. They will be competing against wrestlers from 18 other schools at the classic.