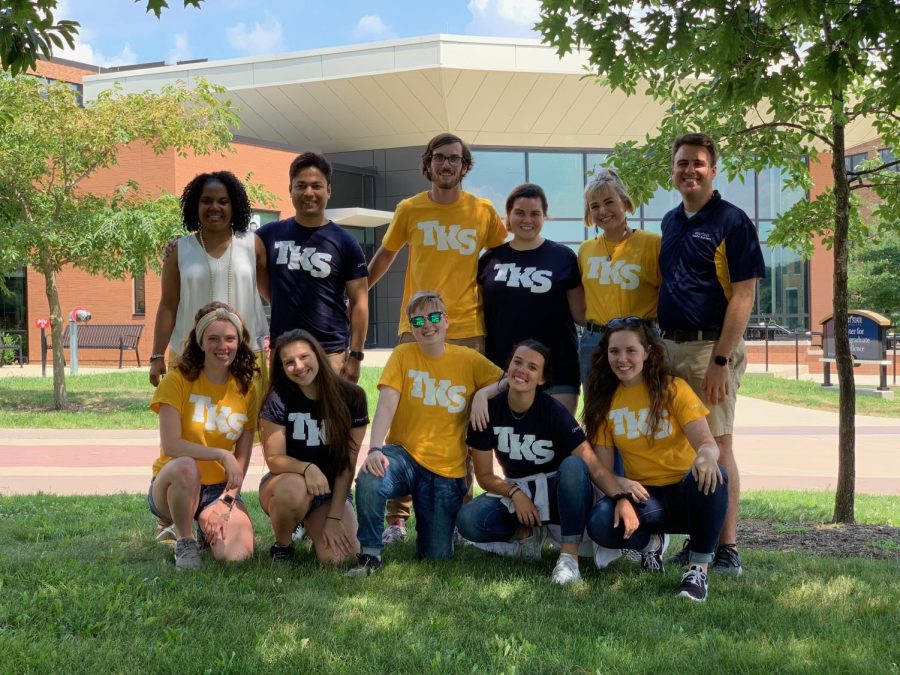 Student leaders for TKS pose for a photo.

For senior psychology major Sidney Fimiani, transferring to Kent State University made sense to her.

“I came here and I just kind of fell in love with it. … They also have a very good psych program … and lots of research opportunities,” Fimiani said.

Ted McKown, associate director for admissions at Kent State, said about 1,500 students transfer to Kent State each academic year. These students often will transfer for Kent State’s program or because they did not like the institution they were at previously. Many students will often transfer in their sophomore year, but some will transfer at different times in their academic career.

In an email, Eric Mansfield, executive director of university media relations, said 1,424 students transferred to Kent State Kent Campus in the 2018-19 academic year. Many students who transfer are either from community colleges or four-year institutions. McKown said most transfer students are from Ohio, Western Pennsylvania and New York.

“Either you started somewhere else, your intention was to transfer to Kent State … starting at a community college and then transfer at a later date, or I went somewhere else and had kind of this trigger moment, something went off in my brain that this isn’t the right fit for me,” McKown said.

Kent State recently received a $1.09 million grant from Ascendium Education Group in an effort to help create more articulation agreements and pathways for students who transfer to Kent State, as well as find out more about the certain challenges and barriers to entry that students face when they transfer.

Some barriers to entry and challenges students may face when they transfer include financial challenges, difficulty adjusting to a new campus, challenges navigating advising and other university systems and getting connected on campus.

Barbara Miller-Harris, assistant director for student success programs, said Kent State has made a significant effort in order to help students when they transfer and try to remove a lot of barriers to entry.

Transfer Kent State (TKS) is a mandatory orientation for students who are transferring to Kent State. At this orientation, students will learn more about what student life at Kent State entails and how to get involved, as well as how to schedule academic advising and schedule their classes for the upcoming semester.

“When they come through orientation, they are taught things about the systems and how we make the advising appointment for them so that those things are addressed,” Miller-Harris said.

One of the biggest challenges transfer students face when they arrive at Kent State is meeting new people and getting involved. Students like senior human resource management major Cody Reynolds struggled to get connected to campus when he first transferred.

“At my old school, I was in student organizations and stuff like that,” Reynolds said. “At Kent, I never even thought about doing that. So for me, it was difficult meeting new people, as well as adjusting to a new school that I really knew nothing about.”

Reynolds said he recommends new transfer students get involved on campus to make the transition easier.

“I would say join a student organization as soon as you can because for me, my first semester at Kent was bad; I didn’t want to go to school or anything like that because I didn’t know anybody,” Reynolds said.

Both Fimiani and Reynolds said faculty and staff on campus were helpful in getting them acclimated to campus.

“I had believed all the previous stuff about big schools, like you’re just a number, it’s very hard to make friends, your teachers don’t know you,” Fimiani said. “So I was kinda freaked out and I got into my first big class and none of that was true.”

Fimiani said organizations for transfer students like the Transfer Advisory Council and Tau Sigma are great ways to get involved.

“We offer any transfer student the ability to be reviewed for the Transfer to Kent State scholarship,” McKown said. “It’s a merit-based scholarship — you have to have zero to 90 hours … based on your merit, so based on your college GPA, you can get $1,000 to $2,500.”

“It is for those students transferring from one of the Northeast Ohio community colleges,” McKown said. “So if you went to one of those institutions, you get $2500, and that’s for the year, and then that renews one time. So the idea there is that … you’re coming with 60 credits, you have an associate’s degree, so we’re giving you the scholarship for your back 60 credits.”

For students who are considering transferring, Fimiani said making the change to Kent State was one of the best choices she could have made.

“Kind of take that leap of faith,” Fimiani said. “I would say don’t stay somewhere where you’re unhappy or you don’t feel like you’re going to be able to succeed, because it’s honestly not as bad as you think it’s going to be, but there’s people to help you through it.”