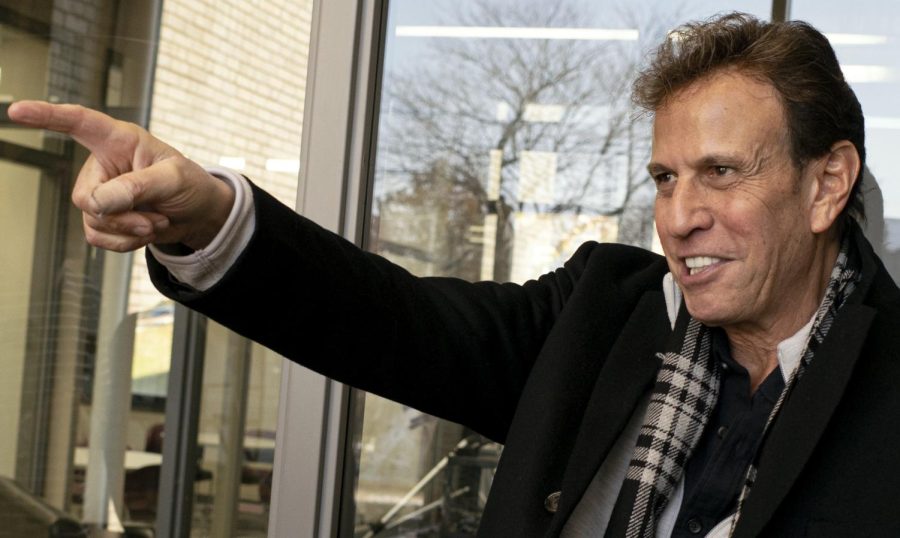 Steve Albert points at someone he recognizes in the Kent Stater's newsroom on Friday, Nov. 15, 2019.

Every Sunday, Steve Albert writes an email to the student broadcasting team with his feedback of the weekend’s broadcast.

Albert said that giving this opportunity to students and being able to mentor them is important to him because he did not have a mentor when he was first starting out.

“I really wanted to meet the student broadcasters face to face and get to know them better,” Albert said. “I want them to know that the door is always open and I’m glad I get to offer feedback.”

Brendon Celender, producer of the broadcast team, said Albert giving them critiques is awesome for his production team to gain experience early in their careers and grow from it.

“One of the first things he did was make a three-  or four-page sports broadcaster guide with little things he has learned over the years,” Celender said. “He gave us tips to remember certain players names or how to say something in a different way.”

Albert met with the broadcasters Friday afternoon and spent time sharing his stories with them and providing them with advice on handling unique situations that may come up.

From caravanning to road games to calling five different fights at one time during a hockey game, Albert laughed as he shared some of his most memorable times as an announcer.

The broadcasters enjoyed sharing their stories on how they got involved with sportscasting and hearing Albert’s feedback.

Albert visited the broadcasting booth at both Kent State hockey games this weekend and said he enjoyed being back in the booth and seeing the production team in action.

Albert spoke to players and alumni at a breakfast on Sunday morning to share his gratitude for those involved with the team and to thank everyone for their efforts in improving the program.

Albert said he holds Kent State in such high regard for giving him his stepping stones into his professional sportscasting and wanted to pay it forward to future broadcasting students.

“It’s great to see everyone and watch everything come full circle,” Albert said. “I got to be here when it all started. To be here with the resurrection of this broadcasting after it’s been dormant for so many years is great.”