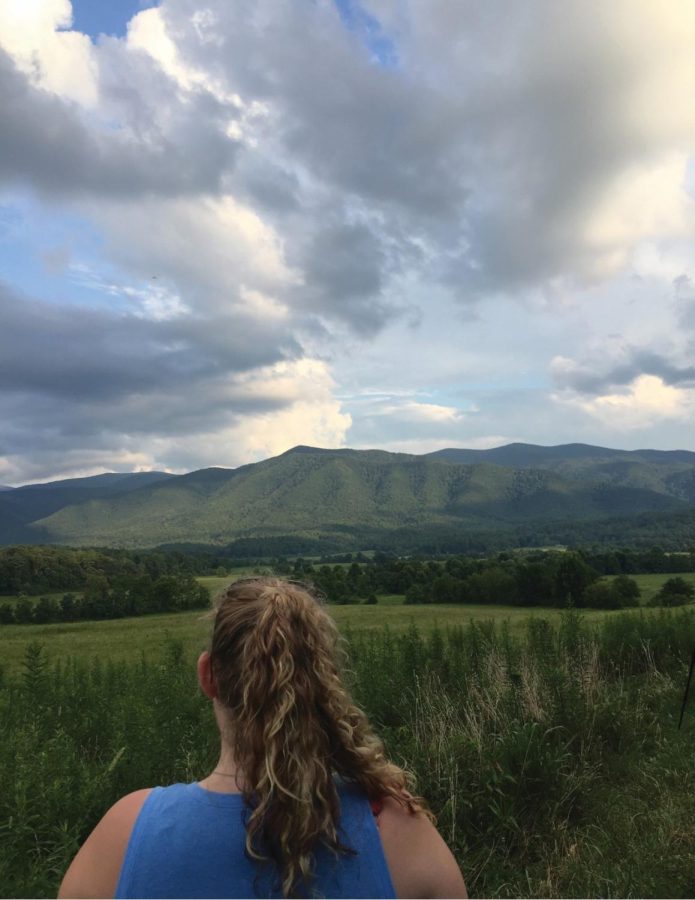 Kayla Marker looking at scenery in Gatlinburg, TN, her favorite place, “where I felt most calm and fell in love with the mountains,” July 2018.

Editorial Note: The story below contains content that may be difficult for some readers, with topics of physical and emotional abuse.

A typical weekday includes waking up at 8 a.m. and getting ready for the day, going to two or three classes and then working four to five hours. She finds time to eat and work on homework and then goes to sleep just to repeat it all again the next day.

Some days, she even fits in a counseling session or a social event, which can completely fill up her day from start to finish.

For most people, a busy schedule means a stressful day. To Marker, it means structure, stability and predictability — something she rarely had growing up.

“Her mom would kind of belittle Kayla in front of me,” Reinhardt said. “There were multiple times where I would be over on the weekend and her mom would leave to go to work and say, ‘Emily, you’re in charge,’ and Kayla would be like, ‘This is our house, why are you putting my friend in charge?”

The first time Marker could recall her mother physically abusing her occurred on her 17th birthday during her party, just two months after getting a concussion from playing lacrosse in school.

“She was supposed to bring the pizza and she came late,” Marker said. “When she got there, we could just tell she was drunk and belligerent. She called me a bitch, hit me and slammed my head into the car.”

During the time of the abuse, Marker struggled with feelings of depression.

“My mom was always talking down towards me,” Marker said. “She told me I wasn’t good enough, that my dad wouldn’t want me. She really put a toll on me and my self-esteem.”

When times got too difficult for Marker to handle, she had a support system to turn to in her close loved ones.

“Kayla is an ‘I’ll solve this on my own’ kind of person,” Reinhardt said. “We lived down the street and around the corner from each other and I always said, if something bad is going on, just come to my house. That’s what you do for a friend.”

Marker’s boyfriend of three years, Dakota Varney, played a role in helping her through the end of the abuse.

“It was a lot of consoling,” Varney, the 22-year-old freshman photojournalism major, said. “I kind [of] helped her get to the point where she was like, ‘I don’t want to talk to my mom anymore.’”

Marker’s aunt on her father’s side, Bonnie Marker-Napoli, opened up her house to Marker when she was old enough to move out of the abusive household.

Jamie DeMeyer, Marker’s other aunt, from her mom’s side, recalled a recent memory of when Marker called her and asked for help with remedying a scraped leg.

Although Marker still struggles with low self-esteem, along with new-found anxiety due to the abuse, she doesn’t let it hold her back from living her life to the fullest.

“I don’t like to spend time feeling sorry for myself because I’m out of it now,” Marker said. “Now, I like to spend my time advocating for people who are in the same situations on how to get out.”

As an outlet for Marker to advocate, she acts as president of Active Minds at Kent State. She and her executive board brought Active Minds to Kent State last semester in hopes to provide a platform that shares information and resources about mental health to those searching for it.

a national organization founded by Alison Malmon in 2003 in Washinton D.C. after her brother died by suicide while she attended college, aims to “change the conversation about mental health,” Marker said.

Not only does Active Minds help heal its members, it also plays a significant role in Marker’s own healing.

“I really take a lot of pride in being president,” Marker said. “It’s a really good platform for me to use my creativity and for me to be an advocate about mental health. It’s such a nice environment. I just love everything about it.”

Along with her role in Active Minds, and its role in her life, Marker attends counseling at White Hall every other Tuesday.

“I started going to counseling at White Hall to deal with (my anxiety) and to cope with what my mom did to me,” Marker said. “To understand the fact that it wasn’t my fault and then come up with some mechanisms to get rid of that anxiety and the anger that I have built up inside of me.”

Miller mentioned counselors often give their clients “homework” to work on; activities tailored to each individual to help them cope outside of counseling.

Marker recalled her own homework that her counselor gave her to help with her anxiety, including tasks such as journaling and meditation.

Counseling not only encouraged Marker to work on herself and her mental health through prescribed homework but also by doing the everyday things she loves including hiking, crafting, traveling and more.

Although Marker still has a long way to go in her journey with overcoming her mental health struggles, she has come a long way.

“She’s a really good, big-hearted kid. She’s just always bubbly and smiling,” Marker-Napoli said. “And she struggles, but she’s taken that and turned it into a positive so that she can help others that may have experienced, or are experiencing, the same thing that she has.”

An individual close to Marker, but wishes to remain anonymous due to sensitivity, said, “If I grew up the way Kayla grew up, I would have been a broken person, but she isn’t. Her mother did not break her.”

“She is an amazing person and I just love her so much,” DeMeyer said. “I’m really excited to see where she is going to bring herself to be when she gets older.”