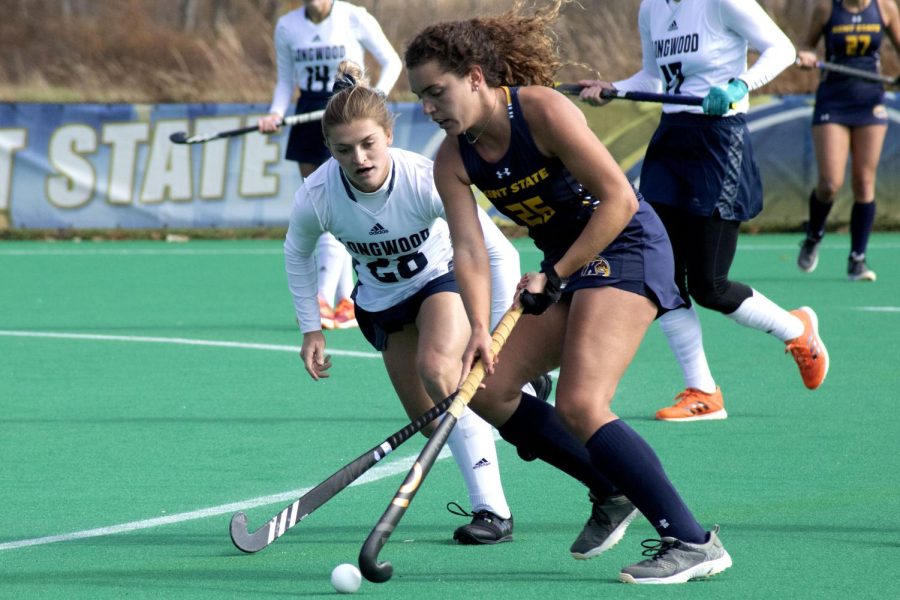 Clara Rodriguez Seto, midfielder and number 26, dribbles the ball up the field during the field hockey game against Longwood University on Nov. 02, 2019. The Flashes lost during double overtime 2-1.

“I don’t think being the first seed necessarily adds pressure,” coach Kyle Desandes-Moyer said. “I think the team has a really good mentality to take it one game at a time and put all of our energy and focus on Friday to play a good solid 60 minutes and if we work hard we will come out with a win and be able to move on to the championship.”

The Flashes most recent tournament appearance was in 2018 and ended with a loss to Miami University in the championship game.

“Right now the coaching staff is working on reviewing the film of all of the opponents that we could face this weekend, but you just need to go in prepared to face either team,” Desandes-Moyer said.

Desandes-Moyer was named the 2019 MAC Coach of the Year.

“At practice with the team we haven’t been focusing on an opponent just yet, but instead just refining some of the stuff that we need to fix for the weekend,” Desandes-Moyer said.

During the regular season, Kent beat Ball State on the road last month and Longwood handed the Flashes its only conference loss of the year last weekend in double overtime.

“I think a lot of our players would like to face Longwood again because I don’t think we played our best game and if we can play how we played some of our other MAC games I think we could win,” Desandes-Moyer said. “I think it could be a little bit difficult because they did beat us and there is always that concern, but we are ready for either team and any challenge we could face this weekend.”

The Flashes have seven freshmen on the team who have never experienced the MAC tournament before.

“We are trying to have fun and competitive practices that emulate playing under pressure just to get some of those nerves out, but we are also doing things with the team outside of practice and we have some alum reaching out and upperclassmen giving them advice,” Desandes-Moyer said. “Overall, we are just trying to keep it super light and positive so that they don’t get in their heads.”

The key to a Kent State win will be to put a solid game together from start to finish and execute on penalty corners.

“I think we need to play consistent through a whole game with consistent effort and very disciplined defense going into this weekend, not give up a ton of penalty corners, and capitalize on our attacking opportunities, especially on penalty corners,” Desandes-Moyer said.

The Flashes open up tournament play Friday at 11:30 a.m. at Miami University. They will play the winner of Thursday’s match between Ball State University and Longwood University.