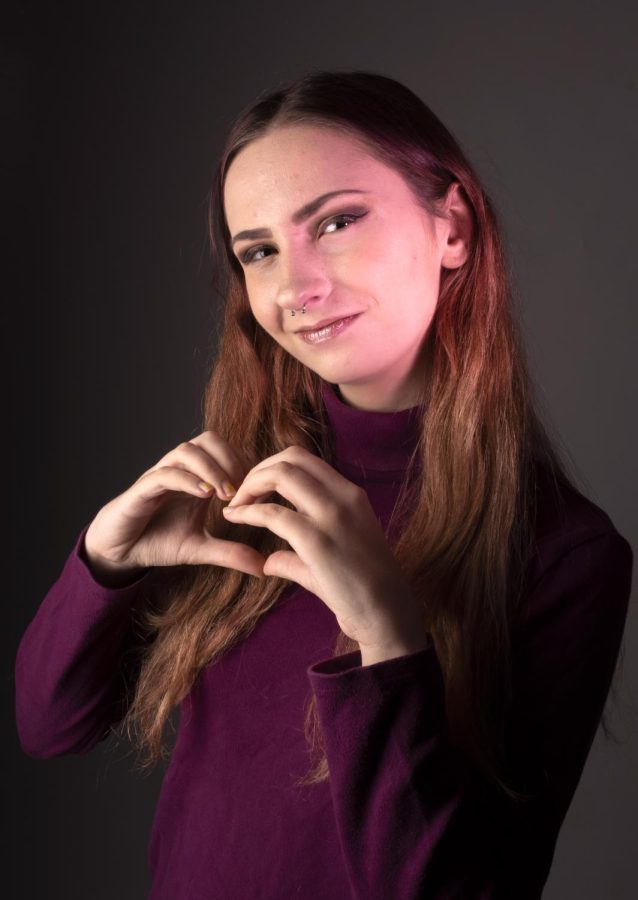 Every year, the LGBTQ+ Center releases “Flashes of Pride,” a poster designed to showcase different voices at Kent State. The poster gives members of the LGBTQ community the opportunity to celebrate their identities and increase visibility across the university.

Autumn Pritchard, a freshman fashion major, said sexual identity is a part of everybody’s life, but it is not a defining characteristic.

“I feel it is important that you embrace it,” Pritchard said. “Don’t try to hide it because I tried to hide it for so many years.”

Pritchard said she felt different when she was 12 years old. “I thought that I am just being weird,” she said. But in her freshman year, she fully embraced her identity as bisexual, she said. Although she dates both males and females, Pritchard said she leans more towards dating females.

“It something that was part of me and I can’t hide it anymore,” she said.

Dealing with criticism can be sometimes irritating for Pritchard. “I get small comments like ‘why you don’t pick a side?’” she said. But Pritchard said she usually confronts it by talking with a friend about it. “I like to stand up for what I believe in and I am not just gonna sit around and let people criticize me.”

Freshman managerial marketing major Amanda Linch sees identity as an important part of how she views herself.

“My identity is important, but not how other people view me as much as how I see myself,” Linch said. “Identity is only important to me in my own mind. Explaining my sexuality and romantic interest is hard. People don’t understand how I can have a relationship without any of the sexual attraction.”

Biromantic means a person who is romantically attracted to one, two genders or their own.Biromantic asexual people may want romantic relationships for many reasons, including companionship, affection and intimacy, but they are not sexually attracted to their partners.

Lucio Svoboda, a freshman zoology major, said he changed from female to male as he was not interested in females’ clothes since he was young. Additionally, he is attracted to men.

“It helps me feel more comfortable in who I am,” he said.

Coming out wasn’t an easy decision for Svoboda, although all of his friends knew, his mother wasn’t accepting it at the beginning.

“She was like ‘oh, you are young. You don’t know yet’ like it is just a phase,” Svoboda said.

It was frustrating for Svoboda to face this rejection. “I was trying to show her that it is not a phase and I haven’t changed in the inside.” His mother accepts it more now, he said.

“Take all the time you want you to achieve your own person, so it could take you a few days to realize you this gender or this sexuality or it can take you 10 years to realize it,” Svoboda said.

Christopher Roman, an associate professor in the department of English, said identity is important to him.

“Identity is important for a number of reasons,” Roman said. “For one, it gives me a sense of community. Identifying as queer connects me with people present and past.”

Roman said as a faculty member, he has the privilege to help other people who identify as queer feel safe and comfortable to speak out, and making sure to let people know about his identity so that they know that he is a resource to students and can approach him with questions, problems, concerns, or advocacy.

Jeffrey Bixby, a Kent State alumnus, said that being gay has been an important part of his identity.

“Being gay was majorly important to me. I had come out in the early seventies. What makes me different is that being able to be gay and be myself has become an important part of my identity and who I am,” Bixby said.

Bixby was a school teacher for 30 years, and being a gay man made him a better teacher because he was sensitive and cared about his students.

“Being a gay man helped me to be able to be a better man for my kids as a teacher. I was an out teacher and I was involved in my community and I was an activist all those years of teaching and even after retirement. It’s still a major part of my identity.”

Freshman exploratory major Brayden Linz said identity plays an important in who he is, but it isn’t the only thing that defines him.

“My identity is pretty important,” Linz said, “but it’s not the main aspect I think of when thinking of me. It makes up who I am and if you don’t like that aspect about me, that makes it difficult to form a relationship.”

Linz advises people to not set boundaries on themselves or put themselves in a box.

Editor’s note: A previous version of this story said Christopher Roman was an associate professor. He is a professor.