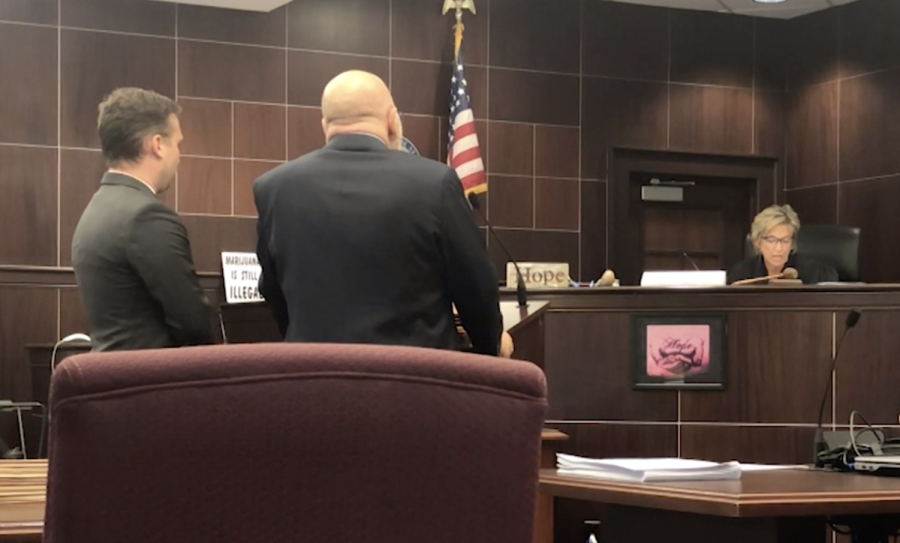 Guska stands with his attorney in Judge Becky Doherty's courtroom in the Portage County Common Pleas court on Oct. 7, 2019.

157 Lounge co-owner Matthew Guska was sentenced on Monday to two weekends in the Portage County jail and two years of probation for assaulting a man in September 2018.

Portage County Common Pleas Judge Becky Doherty ordered Guska to pay restitution to the victim, Mohammed Raja Alanazi, of Franklin Township, in addition to his jail sentence. Guska will also be required to undergo an evaluation for anger management classes.

Alanazi gave a statement before the sentencing at the Portage County Common Pleas Court in Ravenna. He said he thought Guska “got less than he deserved.”

Guska pleaded guilty to a first-degree misdemeanor assault charge in May. He was originally charged with two counts of second-degree felonious assault.

According to a police report obtained by the Record Courier, Alanazi told police he was arguing with another man at 157 Lounge on Sept. 23, 2018 when Guska approached him, physically grabbed him and carried him outside.

Alanazi told police Guska struck him in the head with a flashlight that doubles as a taser. He received six stitches at the University Hospitals Kent Health Center.

According to court records, prior to the hearing Guska’s lawyer filed to push back the date in order to finish a different assault case that was recently brought up against him. Doherty denied the request.

The pretrial for this case is set to take place Nov. 12 in the Portage County Municipal Court.