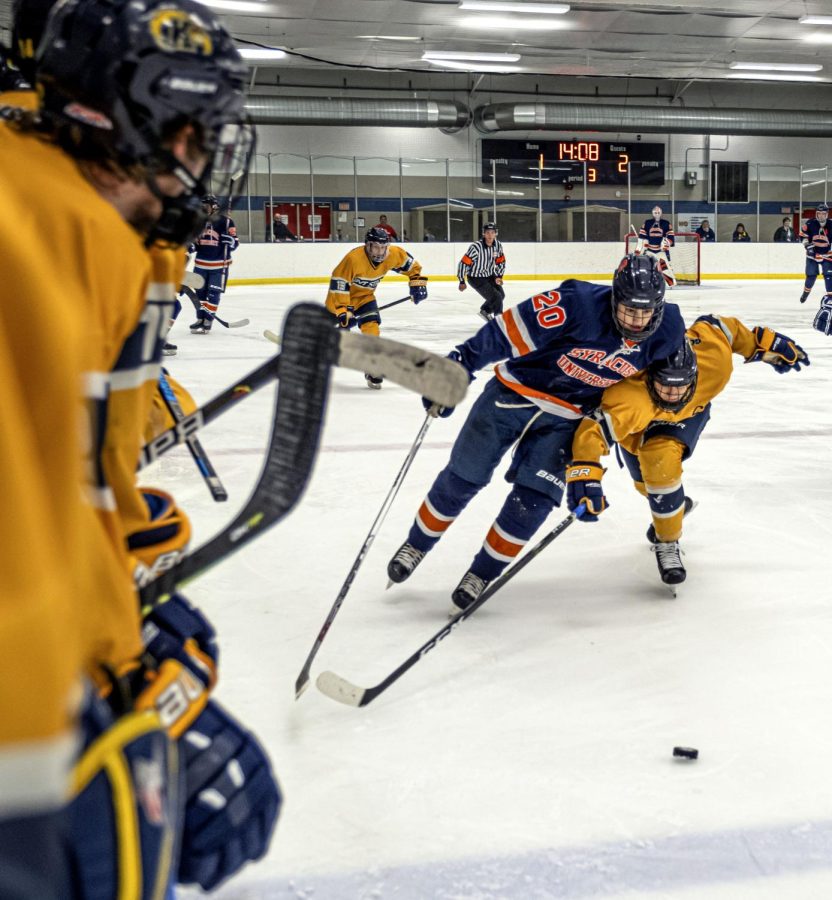 Junior forward Rubin Chavarria chases after the puck while Syracuse forward William Franzese pushes against him during Kent State's game against Syracuse on Saturday, Oct. 5, 2019.

Due to injuries, the team is down to only dressing 5 defensemen, which forces freshman to step up and play extra minutes. Coach Jim Underwood said the team focused in practice on its defensive zone play both with and without possession of the puck.

“We have two freshman logging a lot of minutes, and we’re putting them in situations that a freshman should not be involved in this early in the season,” Underwood said. “They’ve handled the adversity very well. They have done a phenomenal job for us”.

Friday night the Flashes were on top 2-0 with goals by sophomore forward Alex Halupnik and freshman forward Zach Zwierecki.

Syracuse responded in the third period scoring 3 goals in eight minutes to send the game to overtime a score of 3-3.

Senior forward Rob Ferrari had two goals on the night, including the overtime game winning goal.

“After a little bit of a rough start last week, it feels nice to be able to get it done for my team,” Ferrari said. “I’m hoping that we just aren’t satisfied with this. I hope we build off of this and start rolling the ball and making this an everyday thing.”

“We need to improve on our power play right now,” Underwood said. “Our five guys are getting outworked by four penalty killers. It’s hard to make adjustments when the effort is not there. If we score a couple of those early, we aren’t in overtime situations.”

Underwood said the amount of penalties is becoming a problem. Part of that comes from the youthfulness of the team and part from frustration of some players.

“Our guys need to learn that there is a fine line to walk with emotion and aggression on the ice,” Underwood said. “We have too many guys crossing over that line right now. We lost that game in the second period when we had to kill eight and a half minutes of Syracuse’s powerplay.”

The single Kent State goal was scored by junior defenseman Dylan Anderson to put the Flashes on the board in the first period.

Kent was unable to kill off Syracuse penalties, gave up two power play goals and came up short.

“Our guys are learning that they have to compete every time they get on the ice,” Underwood said. ”We aren’t playing a full 60 minutes yet, but we are slowly closing that gap.”

The team will play its next game at home Friday, Oct. 18th at 7:30 against the University of Toledo.