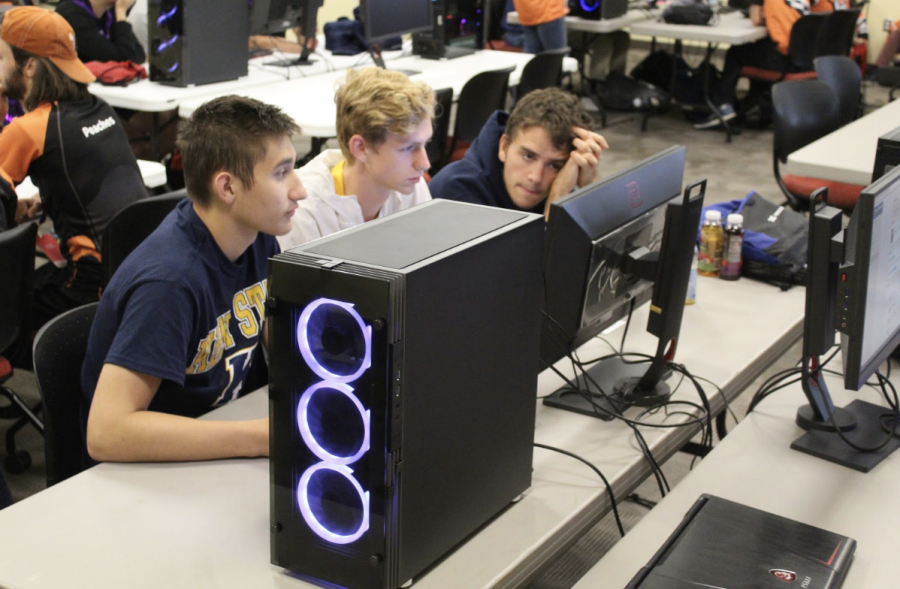 Edward, Justin and Ben work together to make the best possible moves for their team.

The team had a tough road to winning the tournament. In Hearthstone each round is played in a best of five series.

“In the semis we had a reverse sweep win, we were down 0-2 in a best of five series and came back and won three in a row against Lebanon Valley to make the finals,” Miller said.

Lebanon Valley was the only team that beat them in the tournament, at the very beginning in the Swiss rounds.

The HUE Invitational is invitation only for colleges across the country. There were ten teams that competed in the Hearthstone tournament.

The format of the Hearthstone tournament was Swiss rounds followed by a bracket for the qualifying teams.

Maria Hawkins, Kent State’s Esports coordinator, said, “Collegiately this is one of the biggest tournaments that we compete in.”

After overcoming this adversity in the semifinals Kent State beat the undefeated Drexel University in a 3-0 sweep to win the tournament.

“It felt good to have everyone at the tournament cheering for us because they all wanted us to beat the undefeated Drexel,” Miller said.

Hearthstone Esports didn’t have much practice time leading up to the tournament. Kent State was able to win almost entirely based on their abilities with less preparation than they would have liked.

“We only had two actual practices and one match prior to the tournament,” McLaughlin said.

“During the tournament it was kind of just us on our own. Instead of sitting around and watching the other matches we would go back to the hotel room and work together for our next round,” Cookson said, “Thursday night leading up to the tournament we stayed up late practicing and playing with the decks we had to find any weaknesses. As the tournament went on we learned from our matches and worked on our mistakes.”

The team is currently 5-0 in Tespa League play, which is a national collegiate Esports league and subsidiary of Blizzard Games. Kent State’s next match is on October 22nd at 7:00 pm. Tespa league matches are played online.