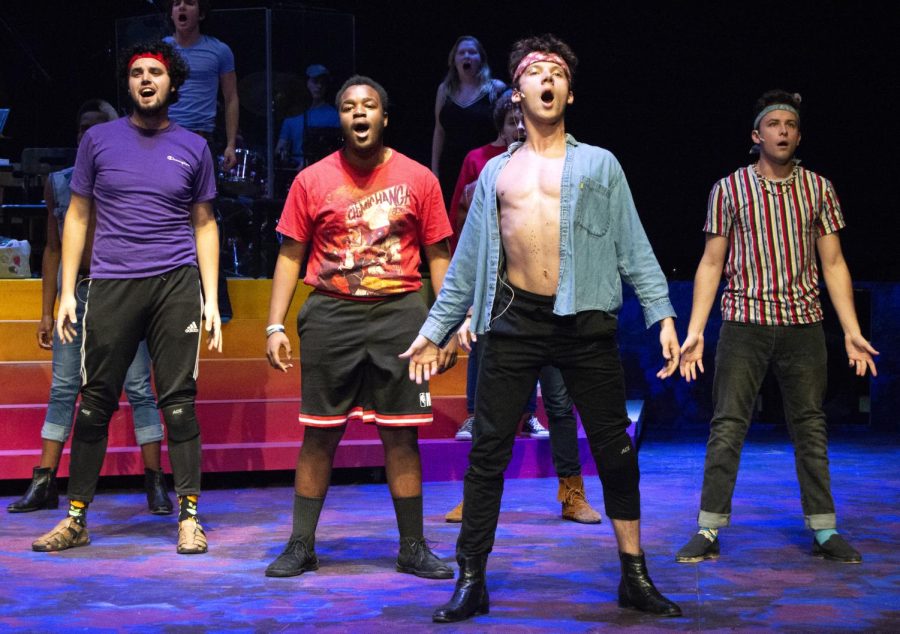 Kent State musical theater students rehearse for the run of Hair the Musical on Oct. 23, 2019. The American tribal love-rock musical explores identity, community, global responsibility, and peace in a changing world. Hair will run from Nov. 1-10, 2019 and is directed by Terri Kent.

Kent State Theatre will debut the musical “Hair” in early November, spreading the same message of love and peace the students of Kent State tried to spread 50 years ago on May 4.

“We wanted a season that supported that commemoration and dealt with social injustices and other themes that supported what had happened in the ‘60s, as well as what’s happening today,” Terri Kent, director of Kent State’s Musical Theatre program, said. “Hair just seemed like a perfect choice.”

“Hair” debuted Off Broadway in 1967 while the Vietnam War was raging overseas.

The musical tells the story of a tribe of hippies and their resistance to the draft and also explores the sexual revolution of the late ‘60s.

“My favorite thing is probably, it sounds so corny but, the message of acceptance and kind of one universal family,” Devin Pfeiffer, a sophomore musical theatre major, said. He plays Berger, a lead character in the show. “Right now I think that’s what we need with all the current events going on.”

He added, “If you turn on the TV or the news… it’s always chaos, everyone’s fighting each other and this just kind of brings us back together a little bit.”

The musical addresses several social issues of the ‘60s with rock and funk music including racial issues, sexual freedom, drug use, environmentalism and the draft.

“We see a lot of duality between compassion and war,” Samantha Kennett, a junior theatre studies major, said. She plays Sheila, a lead character in the show. “It’s not like a slow shift into one or the other, it’s an extreme to a quick change to another extreme. You see the war and then you see all of us loving each other, then something crazy again.”

Tickets are available at the Performing Arts Box Office, located in the lobby of the Roe Green Center for the School of Theatre and Dance, by phone at (330) 672-ARTS (2787) or online.