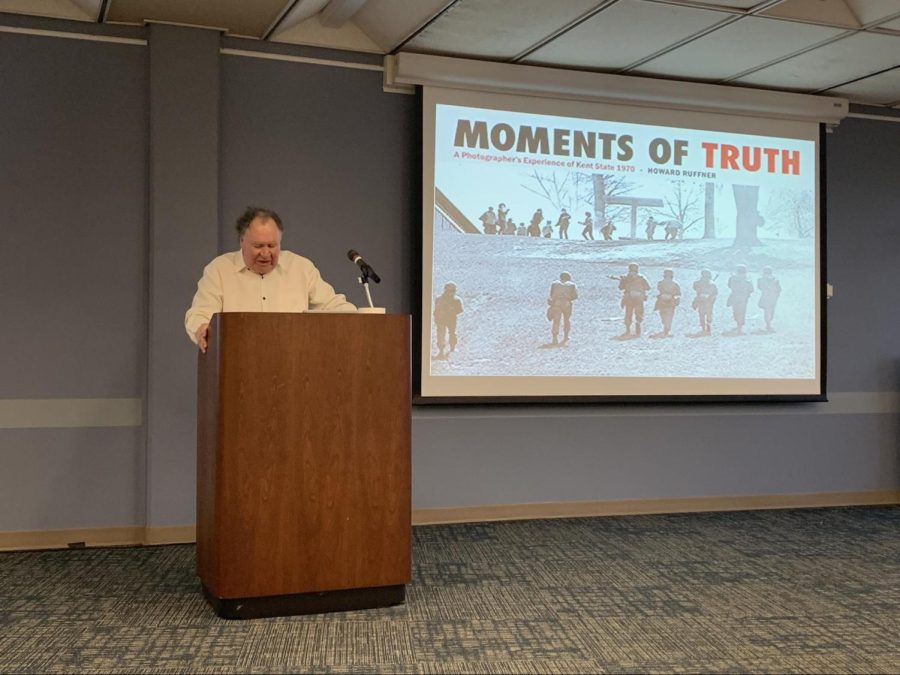 Howard Ruffner speaks during his book launch on Thursday Sept. 19, 2019.

Howard Ruffner, a Kent State graduate and photographer, visited campus for a series of events commemorating the 50th anniversary of the May 4, 1970 shootings.

Ruffner is the man behind many photos taken not only on May 4, but throughout the weekend leading up to the infamous shootings.

Ruffner began his visit to Kent with a discussion at the 15th annual Poynter KSU Media Ethics Workshop about the ethics of photojournalism and the importance of student activism.

Ruffner said photojournalists need to share “moments of truth,” even if they are feeling the fear or sadness of the moment.

“The world has to know what you are witnessing, your emotions can’t get in the way,” he said.

In the evening, Ruffner spoke at a launch event for the book he recently published containing his work from May 4 and the year leading up to it, titled “Moments of Truth – A Photographer’s Experience of Kent State 1970.”

After May 4, Ruffner did not even get the chance to look at the photos he had taken. He had made a deal with Life Magazine to share the photos with them and, in a time before digital photo, that meant that he sent them unprocessed rolls of film.

“I had no idea how my film turned out or what images I had captured,” he said to the crowd at the book launch. “I never knew what exactly the cover shot was until Life hit the newsstands later that week.”

It wasn’t until later that Life Magazine would send Ruffner back his photos along with the copyright, giving him the opportunity to share them with the world through his book.

Senior English student Amanda Dorton attended the book launch and said it gave her a new perspective on May 4.

“The photos were not photos that I had ever seen. You know, you see that iconic photo from that day that made it big… it kind of renews the impact of the event to see it from a different angle and to see it from someone else’s story,” she said.

Dorton said it is current students’ responsibility to be informed about May 4, but not only because it is such a major chapter in Kent State’s history.

“We’re in a unique position to learn so much more about it than a lot of our peers around the country… I think it becomes our responsibility to go to our friends at other schools and into our careers, and to be able to take away the knowledge that we got here,” she said.

Interim Provost and Vice President Melody Tankersley said after almost 50 years, it is still important for the Kent State community to both reconcile with and reflect on the events of May 4, 1970.

“It’s an amazing time and it’s amazing that we can have people that can come back to Kent to share their experiences… we’re very grateful that we have the chance to make sure we don’t ever forget,” Tankersley said.

Ruffner wants students to know through passion they can make a difference and he hopes his book brings this to light.

“It was really the passion of these students that helped to end the war. Ten months after this, 90 percent of troops were starting to be pulled out of Vietnam… I want to see students know that they can’t give up, don’t give up. If you have a passion and it’s big enough and important enough, do it.”