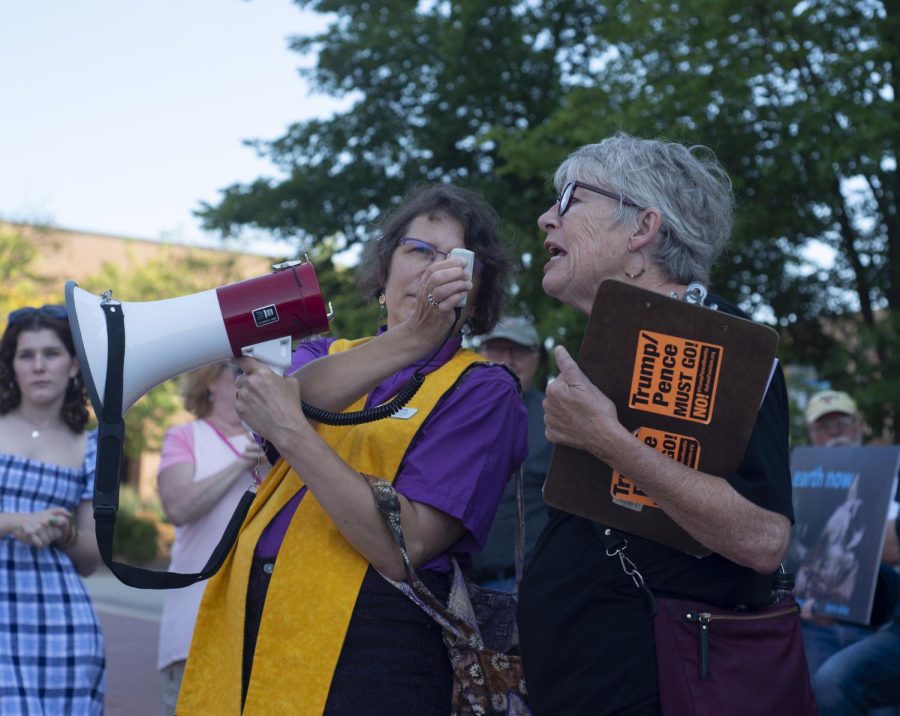 Reverend Renne Zimelis-Ruchotzke holds the microphone for Cheryl Lessin as she tells the crowd about a non-violent protest in Washington D.C. that will push against what she called the "fascist regime" of President Donald Trump at the climate strike held at Risman Plaza on Sept. 20, 2019. She said the "regime" is one of the biggest factors in climate change.

The demonstration, hosted by Students for a Democratic Society, was part of the Global Climate Strike. Millions of protestors in more than 150 countries around the world took to the streets to call on lawmakers to pass legislation to combat climate change.

“We demand action on climate change because we are in an emergency situation,” said Lee Brooker of Kent. “We need sensible policy to be immediately be put in place and stop the power of the bigger lobby.”

Demonstrators held signs that read phrases such as “change now,” “respect your mother” and “running out of time.” They also chanted phrases like “hey, hey, ho, ho. Oil lobbies got to go.”

Rev. Renee Zimelis-Ruchotzke of Kent said,“We need to deconstruct the old system so we can reconstruct a new system where we can live in harmony with the planet.”

Freshman pre-fashion design and merchandising major Victoria Bernhart attended the demonstration and said it was important for lawmakers to prioritize climate change because of how it will affect the future.

“The government needs to have a look at what their priorities are because our future needs to be a priority for them,” Bernhart said.

“I believe that we have to do something right now significantly,” Virginia King of Kent said. “Climate change is real and many people don’t seem to understand that in America.”