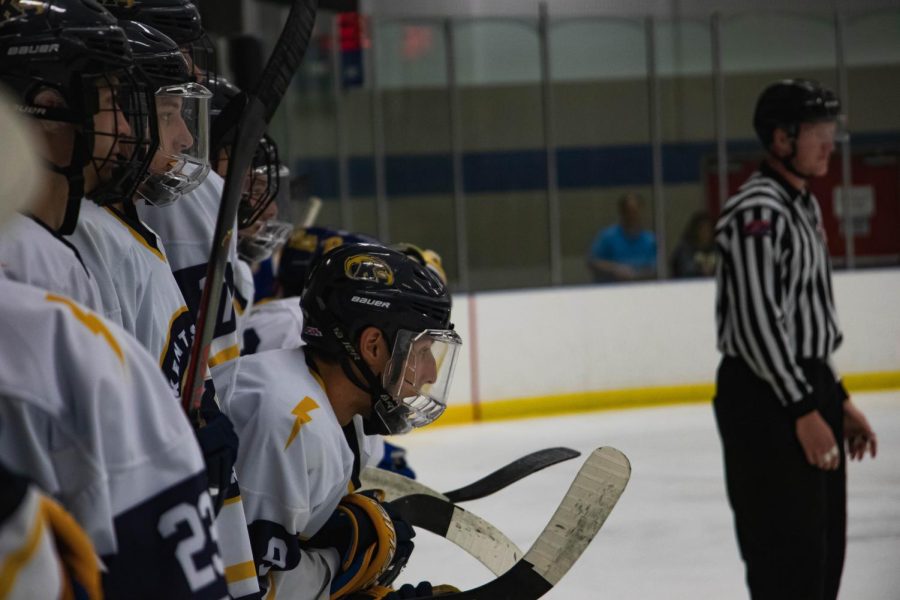 Nathaniel Schwartz watches from the bench as the Flashes face off against the Pittsburgh panthers at the Kent State Ice Arena. Kent lost 5-2. Sep 28, 2019

Fourteen penalties led Kent State to be defeated by the University of Pittsburgh in the season opener this weekend.

The team fell 4-2 on Friday night and 5-2 on Saturday night.

Coach Jim Underwood said despite all the penalties, he was glad to see minutes of good, offensive play. Especially with putting underclassmen in key roles, capitalizing on their mistakes and learning from them will turn to good things for this team.

“We’re going to continue to focus with more detail, some defensive zone play,” Underwood said. “I felt there was a couple times we had the puck on our sticks where we could’ve made plays, but we hung on to it a little too long and created our own turnovers.”

Underwood said winning battles to loose pucks and outskating Pittsburgh forced them to take some penalties, which gave the team power play chances, as well as getting on the scoreboard.

“One bright spot for our team tonight was our penalty kill,” Underwood said. “We went five for six on the penalty kill, and a lot of the things we’ve been working on over the past week we started to see on the ice. However, we have no business being in the box six times.”

Koby Greenberg scored on the penalty kill to give the Flashes some momentum.

“It’s hard to kill off an entire first period of penalty kills,” Greenberg said. “We were definitely tired, but I think we held our own for the most part.”

Rob Ferarri responded to Pittsburgh’s first goal to put the Flashes on the board in the first period.

Pittsburgh fought back scoring two goals. With Kent trailing, they answered with a power play goal, but were unable to make a comeback.

Underwood said taking so many penalties forced them to work extra hard, which is an added task with the team still trying to get into game shape.

Shane Handlovitch took a hit in the third period that took him out of the game with a knee injury. The status of his injury is unknown.

Greenberg struck first for the Flashes to put them on the board after trailing 4-0 early in the second period on Saturday.

The Flashes fought back with a power play goal by Justin Bioni, but were unable to come back, and lost 5-2.

“I’m really excited to see the guys respond after we ended up getting down 4-0 early in the second period,” Underwood said. “The guys really responded for the second half of the game and we want to keep the momentum rolling.”

Kent State’s next game will be at home Friday night against Syracuse University.