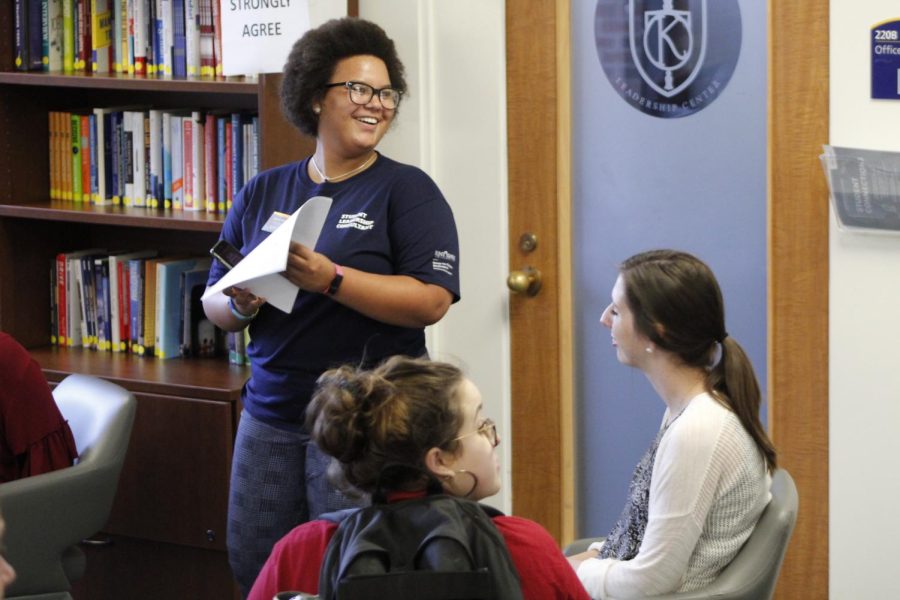 Student Success Leader Jasmyn Robinson leads a small group in the Kent Talk: "The A Word." The small groups had in-depth discussions about abortion rather than the broader discussion the group had as a whole at the beginning of the talk.

Abortion is a topic that has continued to increase in discussion, especially at the Ohio Statehouse.

Student organizations like Planned Parenthood Advocates of Kent State and Kent State Students for Life, hosted a Kent Talk event Sept. 12 inviting members and nonmembers of their organizations to join in a discussion about “The A Word,” or abortion.

This forum allowed students to talk about their personal beliefs in a civil setting while still challenging ideology.

Kenzi Burchett, a senior political science major, is the president of Planned Parenthood Advocates of Kent State. She came to the event to support her organization and stand up for her own opinion.

“After Students for Life repainted the rock and then commented on some things on Instagram, I said, ‘Hey! Let’s have a constructive discussion,’” she said. “So we set it up like this through the Kent Talk event, having moderators and mediators.”

For sophomore political science major Klara McKee, she wanted to showcase that they have “way more in common than what divides us.”

McKee is the president of Kent State Students for Life, a pro-life organization on campus. Her story is different from others due to her growing up in a pro-choice household.

“I thought abortion was apart of a woman’s liberation and women had the right to do whatever they wanted,” McKee said. “I thought a body inside of someone else’s body was theirs. So, I had a really hard time coming to the realization that it wasn’t.”

McKee was raped in middle school and had a miscarriage. She did not tell anyone about this until she was in high school.

Burchett has been pro-choice since she could remember. Interning at Naral Pro-Choice Ohio made her come to the conclusion that not only is she pro-choice, but also pro-abortion.

Freshman philosophy major Meghan Skeldon, is not new to discussing the topic of abortion.

“This is a topic I am very passionate about,”  Skeldon said. “I love coming to this club [Planned Parenthood Advocates of Kent State] every week and everyone involved with it.”

Skeldon believes, “abortion is a constitutional right and I am also for reproductive health care as well as keeping Planned Parenthood open because they do so many amazing things.”

The Kent Talk discussion showcased stories like these through small group discussions facilitated by student leadership consultants from the Leadership Center.

Madison Ledyard-King is not only a sophomore digital media production major, but also one of the consultants for this topic on abortion. This was his first time overseeing a conversation like this.

“I feel this a positive experience. I have not been someone who is super familiar with the topic of abortion,” he said. “It is not something that has affected me personally in the past. It was interesting to hear everyone’s story giving me more insight into why people feel the way they do. It was interesting to see how some have ‘tunnel vision’ of the opposite side by not understanding their story.”